Who knew that all those years ago I would be making a life-changing decision? Certainly not me. I was an inexperienced registered nurse working in a small emergency department in Ft. Lauderdale. While there, I constantly heard about the exciting cases coming out of the large, public hospital in Miami. After a while, my coworkers encouraged me to explore my curiosity and apply for a job at Jackson Memorial Hospital’s Emergency Department. The rest, as they say, is history.

Working the night shift brought all the stories I heard about in the news to life. I was in an environment where I was stimulated, encouraged, and challenged.

I quickly became part of the team. Working in two trauma rooms with only four critical holding beds was a tremendous learning experience, one that was also incredibly overwhelming at times. Running to an operating room or an intensive care unit in another building was exhilarating, but also dangerous. Picking up patients in a wire, freight elevator that opened onto the roof of Jackson’s East Tower was exciting, but also unreliable.

Luckily, there were many smart, ambitious clinicians and support staff members who recognized the need for a better system. People like Dr. Robert Zeppa, Jean Eckes, Dr. Jeffrey Augenstein, Dr. Joseph Civetta, and countless others who worked together to create Ryder Trauma Center.

In August 1992, Ryder Trauma’s doors opened to receive its first patient. Just weeks later, our team had our first real test when Hurricane Andrew struck South Florida. Ryder Trauma was forced into full operational mode – and we were ready. 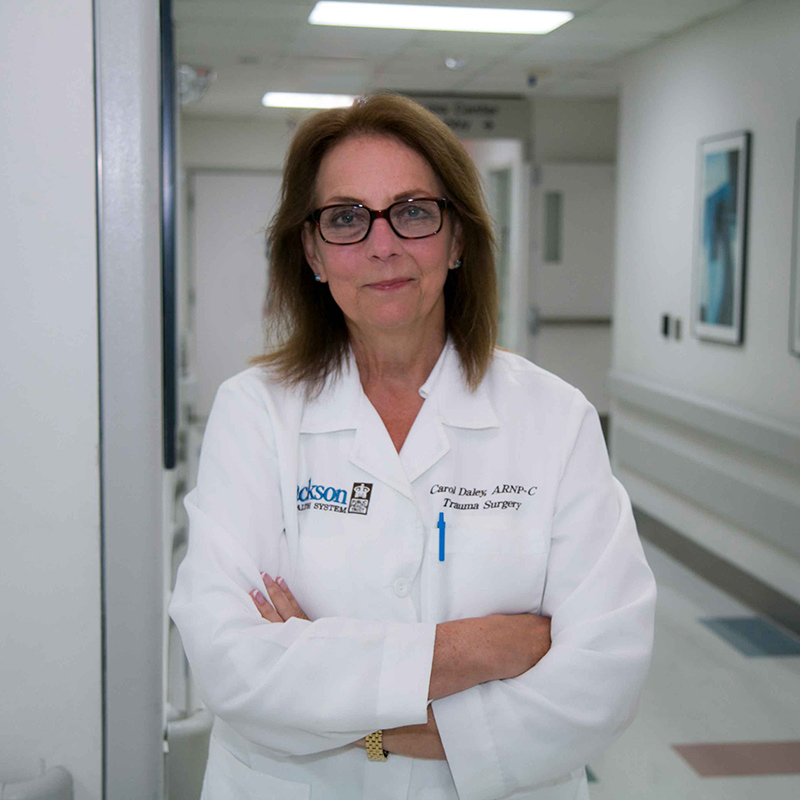 I knew that once the center opened, I wanted to be a part of that team. I was again encouraged by my coworkers to pursue my ambitions, and was hired as the first nurse manager of Ryder’s Trauma Resuscitation Unit.

We had operating rooms just steps away from the trauma resuscitation unit, and a dedicated ICU one flight up on a fast elevator. We had our own radiology professionals and rooms, as well as an elevator to the roof bunker where we could safely receive patients arriving via helicopter. We also had some of the best and brightest medical personnel in the business. It was quickly clear to me and everyone else on the team that there was no place we’d rather be working than Ryder Trauma.

Since that August in 1992, Ryder Trauma has never stopped saving lives and serving the community. It has thrived over the years and continues to be a leader in research, innovation, and education. I have continued to grow along with the center. I became an ARNP in 1997 and still work for trauma today. I have the honor of working with some of the most devoted employees at Jackson, and have made some of my dearest friends here.

Trauma does not discriminate. It does not know age, race, gender, or nationality. It has no regard for time. Ryder Trauma always stands ready for all patients. There are always new, dedicated employees flowing through, each of them bringing with them new techniques, medications, and instruments to improve our practices. Without people who truly care and who are constantly growing along with those innovations, we would be ordinary and not the extraordinary center that we are today. It is the people who work at Ryder Trauma that make it the world-class facility that it is. I can truly say that it has changed my life.